On September 9, 2016, in the case of American Farm Bureau Federation et al. v. Environmental Protection Agency et al., Case No. 13-cv-1751, in the U.S. Court of Appeals for the Eighth Circuit, the federal appellate court revived a bid by two farm groups to stop the U.S. Environmental Protection Agency from releasing addresses and other information about large-scale animal farms under the Freedom of Information Act, finding that exclusive of the mandates of the Freedom of Information Act (FOIA), the provision of such data to environmental groups is actually a privacy violation.

The American Farm Group Federation and the National Pork Producers Council sued the EPA in July 2013 after the agency released the names, addresses and GPS locations of farms that keep animals in close confinement in several states. Environmental groups, including Food & Water Watch, had requested the information, and the plaintiffs sought to prevent further disclosures.

U.S. District Judge Ann D. Montgomery found that Clean Water Act regulations for pollution discharges require farmers to disclose their location to state agencies and that the information must be made public under federal regulations. The plaintiffs argued that the EPA's release information would be an invasion of their privacy and should have qualified for an FOIA exemption.  But the judge held they lacked standing because they failed to show an imminent injury. The information was already available on Minnesota and Iowa environmental agencies' websites and easily found by searching their databases, according to the lower court opinion.

The American Farm Bureau Federation and the National Pork Producers Council asked the court to reverse a lower court's ruling that killed their challenge to the EPA's disclosure of their members' personal information as it related to concentrated animal feeding operations (CAFO's), saying the agency had misapplied an exemption under FOIA that's meant to protect personal privacy.  The farmers argued to the appeals panel that the Supreme Court has held that "the law recognizes a right not only to prevent the public disclosure of facts that remain wholly private, but also to control of 'the degree of dissemination' of facts that, although in the public record, nevertheless concern private matters."

The court of appeals panel sided with the farmers, concluding "the undisputed evidence of nonconsensual disclosures or impending disclosures by the EPA suffice to establish an injury in fact that was caused by the agency and is redressable by the court," adding that "disclosure would constitute a clearly unwarranted invasion of personal privacy ... and it was an abuse of discretion for the agency to conclude otherwise."  "The EPA's disclosure of spreadsheets containing personal information about owners of CAFO's would invade a substantial privacy interest of the owners while furthering little in the way of public interest that is cognizable under FOIA" the panel said.

The 8th Circuit Court held that just because information about a particular farm owner can be obtained through publicly available sources does not mean privacy interests go out the window, highlighting an important distinction between merely accessing information and the likelihood of the public to actually focus on that information.

"The agency's release of the complete set of data on a silver platter, so to speak, eliminates the need for requesters and others to scour different websites and to pursue public records requests to create a comprehensive database of their own," the court said. "If the information were so easily accessible, then it is passing strange that the parties would engage in protracted and expensive litigation to secure it through the Freedom of Information Act."

This case provides The Cavalry Group, its members and other animal owners/enterprises with a solid argument to contest USDA's and other agencies' disclosure of private and personal information being solicited by animal rights and other activists/organizations.

Information for this article also came from Portfolio Media, Inc. and Law360
To view the case file, click here 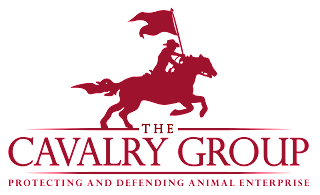 Posted by The Cavalry Group at 1:15 PM No comments: