AZA Whistling Past The Graveyard

Throughout history, evil has persuaded man by masquerading as good. But when evil masquerades as good because it believes it is good, there in lies a bigger challenge.

That's my interpretation in a nutshell of Wayne Pacelle's keynote address before the Association of Zoos & Aquariums (AZA) convention this morning. (Video of his speech is embedded at the bottom of this page.)

Wayne Pacelle opened up his address by stating, “I'm here as an ally, not an adversary."

Contrary to that statement, Mr. Pacelle is a wolf in sheep’s clothing where his actions speak louder than words.  As the CEO of the Humane Society of the United States (HSUS), he has turned the alleged animal rescue organization into the world’s most radical animal rights-driven organization committed to destroying all animal enterprise and animal ownership.

In case you didn't know, Pacelle and HSUS are:

No, Wayne Pacelle is no ally.

Wayne Pacelle is at the helm of an agenda to fundamentally transform our country and destroy animal agriculture, animal enterprise, and animal ownership, at the heart of which is our foundational Constitutional right to private property. 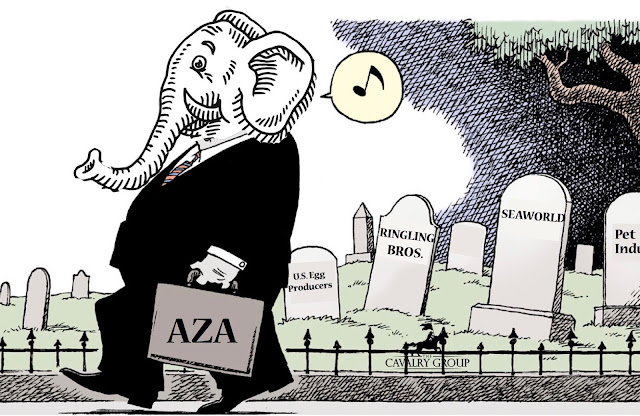 HSUS has been behind the radical transformation in the philosophy that drives the regulation and treatment of those who raise animals for profit using pressure on retailers, promoting misleading state referendums, and pressuring agencies to make federal rule changes to do their dirty work. Time-tested science-based husbandry practices that ensure the health and safety of both people and animals are being redefined as ‘inhumane’ treatment of animals by those, including Wayne Pacelle, who have this emotion-based agenda.

When it comes to zoos, everyone needs to heed the warning that organizations like HSUS are pushing zoos toward the rescue-sanctuary model; to create a profit driven monopoly accessible only by the most affluent under the guise of “saving” species. Impossible to do without breeding programs, which Wayne Pacelle also vehemently opposes. He made this clear during his efforts to stop SeaWorld’s orca breeding program stating, “During my discussions with [Joel] Manby, I was clear that the agreement we forged should deal with all animals – not just orcas.”

Pacelle’s performance on stage at the AZA Convention was nothing more than his smooth talking the zoos about ‘common ground’ and ‘working together to be a force for good,’ arm over their shoulder as he walks them toward the guillotine.

"One way that SeaWorld and animal advocates can find even more common ground is for the company to choose not to breed any more dolphins in captivity and to bring rescued animals that cannot be released back into the wild into its facilities for any exhibition needs. SeaWorld can morph into something of a sanctuary over time." – HSUS CEO, Wayne Pacelle as quoted in TakePart, June 29, 2016

Pacelle’s actions tell us that his ultimate goal is to eliminate human interaction with animals even if that results in the elimination of animal species, themselves.  Behind all the ‘let’s just get along’ rhetoric espoused by Pacelle, his true commitment to destroy animal enterprise and animal ownership shows through.

Americans are tired of being lied to and lied about, and will see through the veil of Pacelle’s true intentions and the potentially devastating results of buying into emotion, not facts.   We must allow time-tested animal husbandry practices to proceed free of interference from organizations like HSUS who claim to care about animals but know nothing about animal care!  Who deemed Wayne Pacelle the expert on the care and keeping of animals?

We hope that the Members of AZA will see through the manure that was tossed in their laps this morning and recognize the false ideology that will ultimately lead to their own extinction.

Mindy Patterson is the President of The Cavalry Group, a member based company protecting and defending the Constitutional and private property rights of law abiding animal owners, animal-related business, hunters, and agriculture concerns legally and legislatively nationwide.

Posted by The Cavalry Group at 7:08 PM